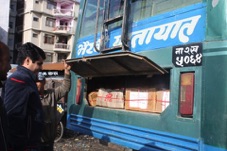 Help Rural Nepal has been supporting local communities in the remote Dhading district of Nepal - which is approximately half way between Kathmandu and Pokhara - since 2009.  We have primarily focused on health and education projects.

These villages can only be reached by jeep or a long walk following a journey on two local busses.  Travelling time from Kathmandu varies between 6 and 10 hours depending on the states of the roads and weather conditions.  Often landslides damage the roads making them impassable.

Dhading is one of the 75 districts of Nepal that lies in Bagmati zone of Central Development Region with Dhading Bensi as its district headquater. New constitution places the district in Province no.3 and the district covers an area of 1926 sq.km. and has a population of 336,067 in 2011.   Dhading is the only district of Nepal which ranges from the mountain Ganesh himal to the churevawar pradesh of terai. Geographically the district spreads from 27’40” E to 28’17″E and 80’17” N to 84’35” N.

The prithvi highway connecting Kathmandu, Pokhara and Bharatpur runs through the southern portion of the district is one of the major link to the boarder of India.  Most of the ethnics in dhading are Brahmin and chettri in southern part followed by the number of Tamang and Gurung in Northern.

The BudhiGandaki hydropower, one of the national pride project estimated to be 1200 megawatt power production lies in western part of dhading that boarders the Gorkha district.  Other smaller rivers are Charaundi, Ghattekhola, Belkhukhola, Maheshkhola, Thopal, Manukhola with other large numbers of seasonal streams.

The main occupation is agriculture and the district is provoked to have a huge potential market for vegetable farming as it is situated at he mid way of Kathmandu,Pokhara and Bharatpur. The district also collects export tax and resource utilization tax from stone mines and sand mines.